Recently I took a leap of faith and did something I don’t normally like to do – put my writing up for judgement. I’ve applied for a Travel Writing Scholarship through World Nomads with the chance of winning an all-expenses paid trip around the Balkans while being mentored by Tim Neville, a professional travel writer and contributor to the New York Times. I know right, WOAH.

Even if I don’t get it, (there were pages and pages of entries), you have to be in it to win it! Plus, it was a real learning experience – learning to write for someone else, with restrictions, and under pressure. Still not sure if I completely like what I produced (I am my own worst critic), but I thought I’d share it anyway…along with a few low-quality photos I managed to scramble together from the experience.

Not being a massive hiker – too many involuntary hikes along abandoned railways in Yorkshire when I was a child – I’ll admit I flinched when my friends suggested a multi-day trek to a hill tribe in upper-Thailand. Not that you would have noticed, in fact I was probably the first to agree to it. I’m not good at missing out on things.

We rose before the sun, shoved some clothes in our backpacks and were hustled into the tray of a ute. We created makeshift seats out of petrol cans and attempted to steal a few extra moments of rest as we were bumped and tossed around on our twenty-minute trip up the mountain.

Reaching out first peak, we looked out across a blanket of clouds, the mountaintops only just in view, and a slight glimmer of the sun peaking over the horizon. The trees in the foreground made for the perfect silhouettes, and distracted us for long enough that we didn’t notice the clouds rolling out of the breathtaking valley below. It took the rising sun flickering in our eyes to remind us of where we were.

And that was just the start. We spent the next two days trudging through rice paddies, picking fresh passionfruit from trees that lined the riverbeds, using machetes to hack through dense forest, and all to find ourselves in a place that could only be described as the middle of nowhere.

No reception, no rescue, it was just us and our bamboo-whittling guide.

Debilitated by a bout of food poisoning, it felt like I had the biggest mountain to climb, until, all of a sudden, I did. But our guide promised us our home for the night was on the other side. Little did he tell us that our home was the stuff of fairytales. Atop a hill, in a clearing of dense shrubs, lit by the brilliant orange sunset, emerged a rural village of the Lahu people – a remote and barely-touched hill tribe originally from Tibet and China.

Reaching the village we stepped into another world. We washed in the stream, and ate chicken curry cooked over the fire. It was the first food I’d eaten in days and it reminded me of home though I was as far from it as I’d ever been. We couldn’t speak a word to each other but the children were eager to play with us, and while the buffalo were highly susceptible to letting out less than pleasant gases, I doubt I would have caught a wink of sleep in my raised bamboo hut had they not been so cleverly herded underneath as ‘natural insulation’.

Watching the sun set that night; surrounded by my Lahu family can only be described as a place I’ll never forget. 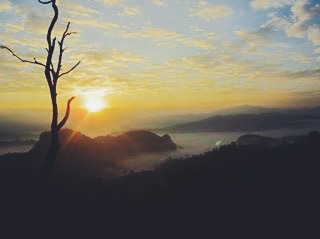 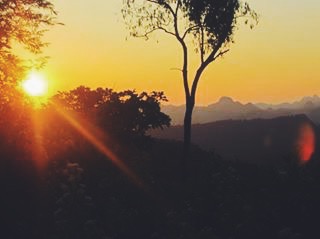 2 thoughts on “To be a World Nomad”

Things at @no.92gpr 🍴
A six minute ferry ride to a place that feels six million miles away. Filled with history, harbour views and handwritten notes from ghosts, I’d highly recommend you go.
Get a fringe, they said. It’ll be fun.
I love my home.
Snaps of my stay at @hotelsteyne for @broadsheet_syd 🥂 Fair to say a lot has changed since the last time I was here.
Yesterday, on Gundungurra and Ngunnawal land 🌾 #alwayswasalwayswillbe
Last few days for it ✨
🌿🌿🌿
Driving this same road a year later and overwhelmed by the power of nature. If anyone is looking for a sign that you can recover, get through something, and even thrive, let this be it.